Witnessing to a Zombie 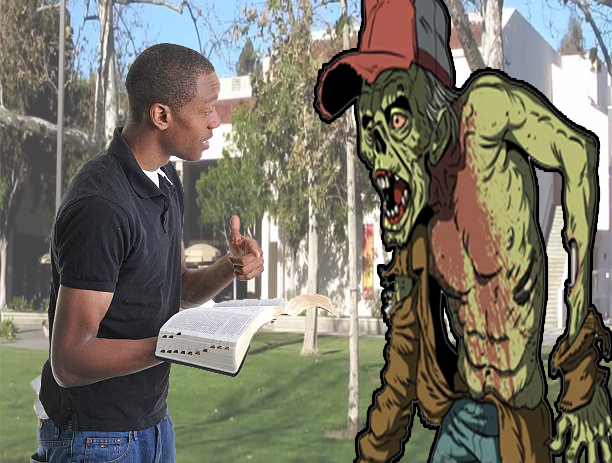 What is a Zombie

I bet you didn’t know Zombie’s were mentioned in the Bible. It’s like the word “rapture”. That word is not in the Bible either, yet a whole doctrine has been made into a into a religious fairytale based on that word.

However, Hebrews 6:4 describes a real loving couple who live together outside of marriage, or someone in a same sex marriage, drunks, druggies, people consumed by anger, liars, thieves, violent people and others who are living in sin while proclaiming they are a Christian. And while living in their sin, they attend church, sometimes twice a week, worshipping YHWH with their lips instead of an obedient heart.

Heb 6:4 For it is impossible, in the case of those who have once been enlightened, who have tasted the heavenly gift, and have shared in the Holy Spirit, Heb 6:5 and have tasted the goodness of the word of God and the powers of the age to come, Heb 6:6 and then have fallen away, to restore them again to repentance, since they are crucifying once again the Son of God to their own harm and holding him up to contempt.

You see, there are Christians who sit in church and hear the Word (making them enlightened) and may have even said the sinner’s prayer, but they live like they never heard it. These people are like zombies they have no heart. Yeshua says if you love Him you will obey Him and if you do He and His Father (YHWH) will come into your heart and live within you. Without Elohim living within you – you are a living corpse (the walking dead – a zombie). Unlike the rapture, zombies are real.

Here is a Battle Plan for Witnessing to a Zombie

Remember, you are interacting with a person who has been enlightened. They have heard the Gospel, they attend church either weekly or occasionally and they proclaim to be a Christian or at least religious. They know about Jesus; however, it’s usually only head knowledge.

Zombies may or may not want to discuss Bible topics and if they do, they think they are OK. The most popular rational is usually they are a good person and that’s enough to get into Heaven. Beware, they don’t like being told they must obey or that being a homosexual is sin things like that yada, yada, yada!

So, what can you do? Prayer first always and then Scripture images. Start with encouragement or unbelief.